"The first black family moved into South Shore in 1957, one of the first to be displaced by housing shortages in the city.  In a way, that year marked the beginning of the end for South Shore."
- The Pied Piper of South Shore by Caryn Lazar Amster 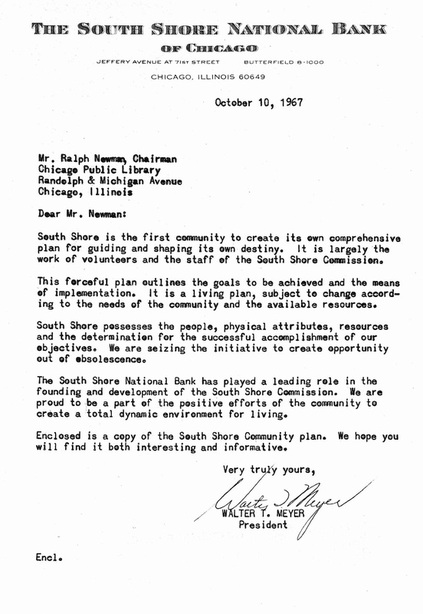 Harold Washington Archives and Collections
"Commission leaders were always concerned that blacks entering South Shore be equal or superior in their occupational and educational status to the whites whom they replaced.  If such could be guaranteed, it was reasoned, the impact of black immigration upon resident whites would be minimized."
- Managed Integration: Dilemmas of Doing Good in the City by Harvey Luskin Molotch

"I never actually met a black person until I joined the military.  We lived in different worlds back then.  Their world was close to them, and my world was close to me."
-Bernard Judge (via a personal interview), co-author of Chicago's Lake Shore Drive, Urban America's Most Beautiful Roadway, retired Chicago newspaper executive, and Native of South Shore. 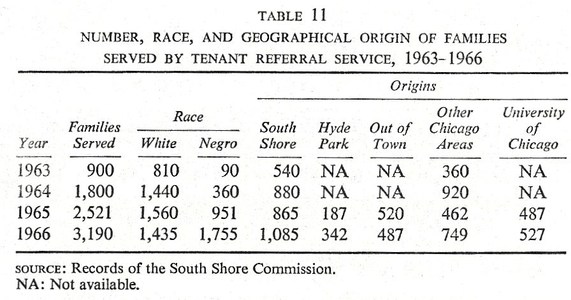 Managed Integration: Dilemmas of Doing Good in the City by Harvey Luskin Molotch
Despite the efforts of the South Shore Commission, the black population in South Shore was steadily increasing, and whites were moving out.
"But, as is often the case, the community reached what sociologists call a tipping point. As the numbers of African-Americans grew and the whites began to leave, landlords did a certain amount of disinvesting; they stopped taking care of their buildings. Then, it got harder and harder to get mortgages for new housing, harder and harder to get insurance. That whole package of events is what people call 'red lining' ——a practice in which you draw a red line around a community, on the map, and you say, 'We're not going to lend these people money anymore; we’re not going to give them insurance'.  Mayor Daley used to have an expert who would tell him when a community was 'finished', which meant that it had racially tipped. At a certain point, they decided South Shore had racially tipped and so they wrote off South Shore."
-Richard Taub (via an interview by the producers of 'Faith, Hope and Capital' on PBS), University of Chicago Paul Klapper Professor

The End of an era